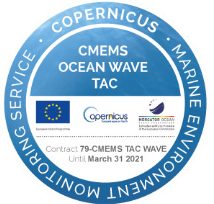 The CMEMS MED MFC Phase-II aims to provide within the Marine component of the Copernicus Programme (CMEMS), regular and systematic information about the physical state (circulation, hydrology, wind waves) and marine ecosystems for the Mediterranean Sea, starting from the operational system developed during the CMEMS MED MFC Phase-I project.

2) processing of information by the numerical models and the data assimilation systems and quality control of the information produced; dissemination and archiving,